Thrilled and honored to have Greg Brown return to Peterborough.

“A wickedly sharp observer of the human condition.” ~ Rolling Stone

“I don't need to read the news. I see it on the faces of everyone I meet.”
― Greg Brown

“I'm reaching out my hand. I hope you are too. I just want to be in the dark with you.”
― Greg Brown

At the personal request of Jeff Bridges, Brown also contributed songs for Bridges’ Oscar-Winning role in the film Crazy Heart. Ultimately, Brown is a storyteller who moves his audiences with his warmth, humor and deeply human musical vision

Greg Brown's mother played electric guitar, his grandfather played banjo, and his father was a Holy Roller preacher in the Hacklebarney section of Iowa, where the Gospel and music are a way of life. Brown's first professional singing job came at age 18 in New York City, running hootenannies (folksinger get-togethers) at the legendary Gerdes Folk City. After a year, Brown moved west to Los Angeles and Las Vegas, where he was a ghostwriter for Buck Ram, founder of the Platters. Tired of the fast-paced life, Brown traveled with a band for a few years, and even quit playing for a while before he moved back to Iowa and began writing songs and playing in midwestern clubs and coffeehouses.

Brown's songwriting has been lauded by many, and his songs have been performed by Willie Nelson, Carlos Santana, Michael Johnson, Shawn Colvin, and Mary Chapin Carpenter. He has also recorded more than a dozen albums, including his 1986 release, Songs of Innocence and of Experience, when he put aside his own songwriting to set poems of William Blake to music. One Big Town, recorded in 1989, earned Brown three and a half stars in Rolling Stone, chart-topping status in AAA and The Gavin Report's Americana rankings and Brown's first Indie Award from NAIRD (National Association of Independent Record Distributors). The Poet Game, his 1994 CD, received another Indie award from NAIRD. His critically acclaimed 1996 release, Further In, was a finalist for the same award. Rolling Stone's four-star review of Further In called Brown "a wickedly sharp observer of the human condition." 1997's Slant 6 Mind (Red House Records) earned Brown his second Grammy nomination. His latest CD, One Night (Red House), is a re-release of a 1983 live performance originally on Minneapolis' Coffeehouse Extemporé Records.

For more about Greg Brown https://gregbrownmusic.org/home 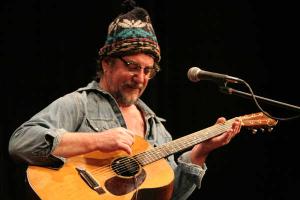