In this new era of Aztec Two-Step after Neal Shulman’s 2018 retirement, original founding member, principal singer and songwriter Rex Fowler continues on with their captivating songs (including some of Neal's originals), expanding the band's musical legacy with his new ensemble. With 2 and 3-part harmonies, multi-instrumental arrangements, and Dodie’s electrifying guitar work, Aztec Two-Step 2.0 recaptures the sound and feeling of Rex & Neal’s original studio recordings. They perform ATS fan favorites and forgotten gems, with the stage patter still as engaging and fun as ever! What fans are saying: "I went to the show…. Wasn't sure what to expect. How do you replace Neal's guitar work? What a pleasant surprise!! Rex was Rex and the band was awesome!....Don't miss the opportunity to see them!"  "Absolutely FANTASTIC show last night. All familiar material, just taken up a notch!! Really, really terrific show! Great job Rex and company!!”  “WOW!…seriously FABULOUS!” “What a wonderful show!! Exceeded all my expectations! Just magical!!”   Rex’s new band members:  Dodie Pettit - Acoustic & Electric Guitars, Keyboards, Vocals Accomplished songwriter and recording artist, Dodie Pettit first met Rex Fowler in 1979 when she was a session player and singer on ATS’s "Times of Our Lives” album.  A member of the famed The Untouchable and The Enchanted Forest All-Girl Bands beginning in the mid-1960s, Dodie was also a former Principal Dancer for the American Repertory Ballet which led to a distinguished 15-year career on Broadway as an original cast member of Broadway’s greatest success story, The Phantom of the Opera. Dodie also appeared in two other Tony Award winning musicals CATS and Titanic. Dodie and Rex were recently married, and together, are the heart and soul of Aztec Two-Step 2.0.
Steven “Muddy” Roues - Upright Bass, Blues Harmonica, Vocals Record producer, songwriter, recording artist and touring musician, Muddy has had a rich and fulfilling 40-year career in music. He continues to perform his original roots music regularly with The Roues Brothers, Finn & The Sharks and The UpSouth Twisters. Muddy has performed live or recorded with luminaries, B.B. King, Bo Diddley, Howling Wolf, James Cotton, Sam and Dave, The Chambers Brothers, Wilson Pickett, John Hiatt, Joe Ely and David Bromberg. Muddy was an honored band member in the critically acclaimed documentary film, “The Other Side of Nashville” featuring Carl Perkins. Joe Meo - Tenor and Soprano Sax, Flute, Clarinet, Vocals Joe began playing music at the age of 8. His first instrument, a clarinet, fell from a car and landed in his front yard. He played in musical groups in school but his main experience came from plying in a student led community big band, learning saxophone, flute and guitar along the way.  He has since played in pit orchestras for Broadway shows, as well as in rock, funk and jazz bands, and as a session player with distinguished artists Johnny Winter, Julie Budd, Johnny Mathis, Billy Vera, the Temptations, the Four Tops and the Pointer Sisters.  Joe is the newest member of ATS 2.0, adding virtuoso solos and supporting lines that compliment and support Dodie’s compelling lead guitar work, and he has been known to step out and sing lead on a song or two as well. 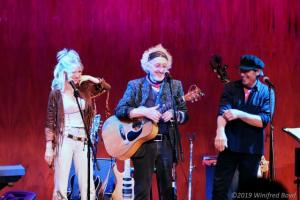