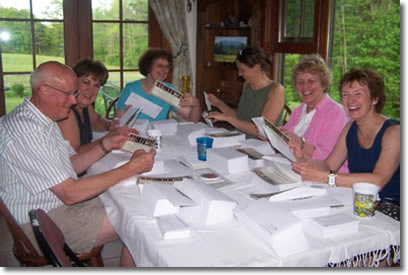 The Peterborough Folk Music evolved out of the well known Peterborough NH's Folkway, a wonderful coffee house founded in 1975 and unfortunately permanently closed its doors on January 1, 1996. At that time a few Folkway board members decided to keep the Folkway's legacy alive and to continue bringing folk music to the Monadnock Region. There were musicians who had been hired for over a period of the next 6 months. So the new Society got busy acquiring a non-profit status, looking for new board members, corporate sponsors, web and graphic designers, volunteers, and looking for a good place to hold folk concerts. We landed in the Unitarian Universalist Church on Main St. which was a wonderful venue for us for the first few years. We asked one musician from each of the next 6 months to come to our new venue. Our first show, only 9 days after the closing of the Folkway, was Dar Williams and Peter Mulvey. Attendance was beyond our expectations and so it has continued since 1996. We moved our location to the Peterborough Players a few years later and there we remain in the wonderful barn where each of the 250 comfortable seats has the best acoustics and a great view of the stage.

We are also now presenting musicians in a smaller venue, Bass Hall at The Monadnock Center on Grove Street. This allows us to work more closely with presenting lesser known musicians and intrudcing you to some amazing musicians.

We continue to live by our mission statement:
The Peterborough Folk Music is an all-volunteer non-profit organization dedicated to bringing the most innovative, entertaining and diverse musicians to the Monadnock Region.

Our Board of Directors